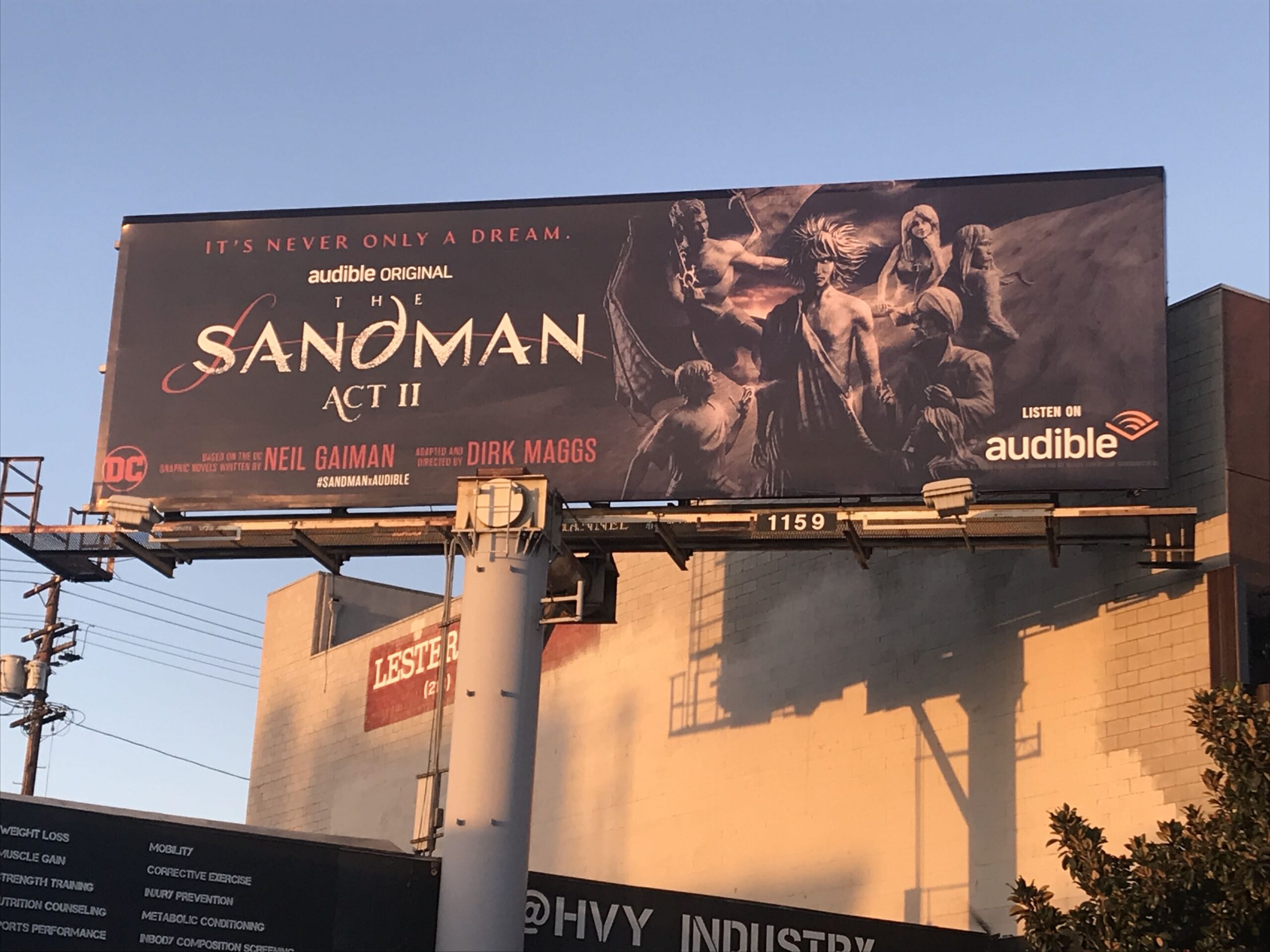 Information about Dirk Maggs and his recent work.

AUDIOBOOK PRODUCER OF THE YEAR 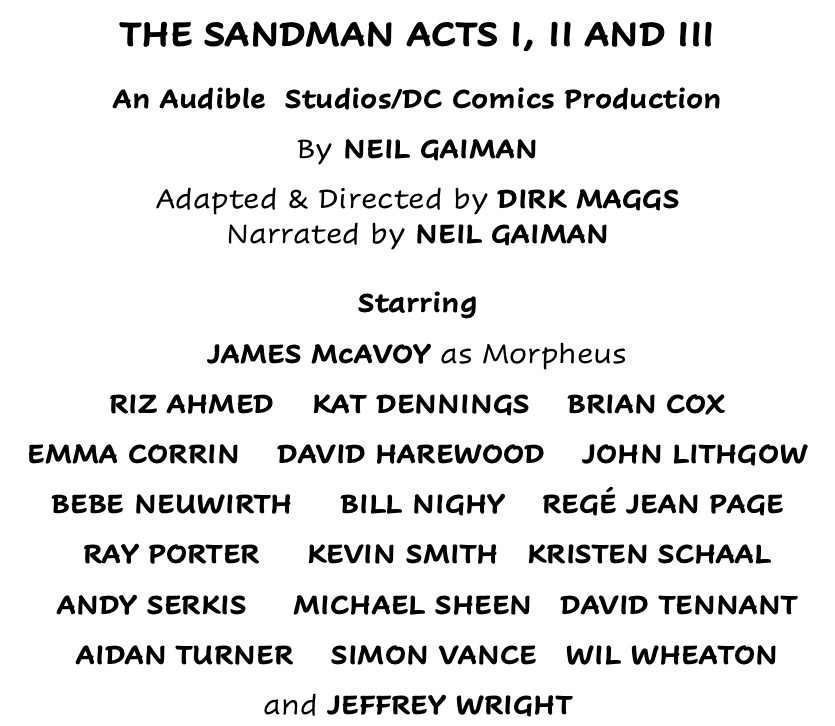 Working with Dirk on The Sandman

“We are children of Radio Drama”

James McAvoy in Studio with Act I Disc

Torn from his realm, Morpheus, the immortal king of dreams, stories and the imagination – has been imprisoned on earth for decades by an occult cabal. On escaping he must restore his power, descend into hell to face Lucifer, chase rogue nightmares, visit a serial killer convention and cross paths with characters from DC comic books, ancient myths, and real-world history.

Audible Studios and DC Comics present the first in a series of audio adaptations of Neil Gaiman’s best-selling graphic novels, adapted and directed by multi-award-winner Dirk Maggs, performed by an ensemble cast with James McAvoy (X-Men; It) in the title role, and accompanied by an original score by James Hannigan. As narrator, Neil Gaiman will lead you through this dark, literary world in a twisting fantasy journey of myth, imagination and terror.

with PAULINE McLYNN and JANE MILLIGAN

BARRY CRYER as ‘The Author’

HONORARY DOCTORATE THE UNIVERSITY OF BOURNEMOUTH 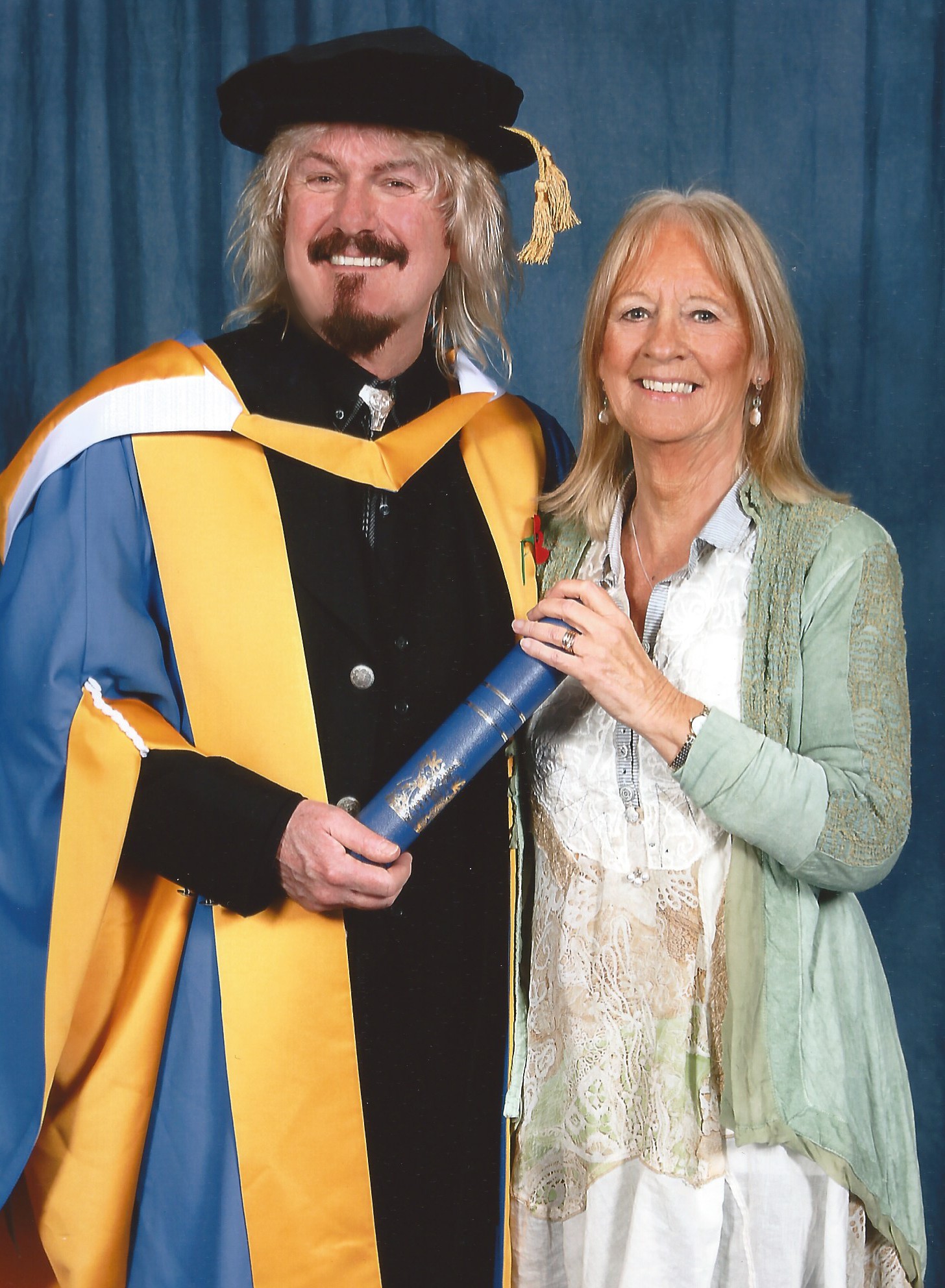 Dirk with his wife Lesley at the Investiture

HONORARY DOCTORATE – NEIL GAIMAN AT THE UNIVERSITY OF WINCHESTER

(where Dirk is an Honorary Fellow)

Dirk and Neil in Winchester Cathedral

THE HITCHHIKER’S GUIDE TO THE GALAXY VINYL COLLECTIONS

Through 2018 and 2019 the DEMON MUSIC GROUP released a series of beautifully designed and put-together vinyl collections in deluxe bindings of THE HITCHHIKERS GUIDE TO THE GALAXY, signed by those of us most closely connected with Douglas Adams’s epic work. I was happy to sign copies of THE TERTIARY PHASE with a little help from our ‘Live Hitchhikers’ version of Marvin The Paranoid Android.

The latest (and last) of these collections is the HEXAGONAL PHASE, released to celebrate the 42nd Anniversary of Hitchhikers in May 2020

THE HITCHHIKER’S GUIDE TO THE GALAXY HEXAGONAL PHASE

Adapted and directed for AUDIBLE by DIRK MAGGS

Dirk’s 1999 adaptation of Stephen Baxter’s ground breaking ‘what if’ novel about the first manned mission to Mars is released digitally on its 20th anniversary.

THE HITCHHIKER’S GUIDE TO THE GALAXY HEXAGONAL PHASE

Written, produced and directed by Dirk Maggs, based on “And Another Thing” by Eoin Colfer                     with unpublished material by Douglas Adams.

THE FINAL TAKE: BOWIE IN THE STUDIO

Released from July 2017 – Directed by William Dufris and Fred Greenhalgh

‘HOW THE MARQUIS GOT HIS COAT BACK‘

From the novella by NEIL GAIMAN, adapted and co-directed by DIRK MAGGS

Returning to the world of NEVERWHERE, this sequel to our 2012 audio movie stars PATERSON JOSEPH, ADRIAN LESTER, BERNARD CRIBBINS, DON WARRINGTON and MITCH BENN,  with a guest appearance by JAMES McAVOY

ALIEN: OUT OF THE SHADOWS

“Great sound effects; chilling story, on the edge of your seat suspense mixed in with hollywood-class acting … it really is like playing a movie in your head.”   (Audible webpage review)

Photos and artwork on this site are owned and copyright rests with their respective owners.