A drama with a personal connection …

Far Side Of The Moore was first broadcast on BBC Radio 4 at 2.15pm on Monday 30th March 2015. It was written by Sean Grundy, produced by David Morley and directed by myself, starring TOM HOLLANDER as Patrick Moore and PATRICIA HODGE as his mother Gertrude. 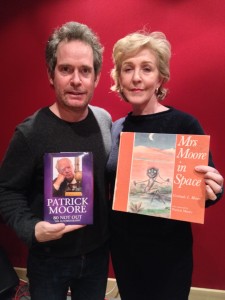 I first worked with Patrick in my days as a BBC Radio Light Entertainment Producer, and we hit it off from the start.  Lesley and I made many happy visits to “Farthings”, Patrick’s house in Selsey, West Sussex, where he and the Sky At Night team would organise parties at the drop of a hat. 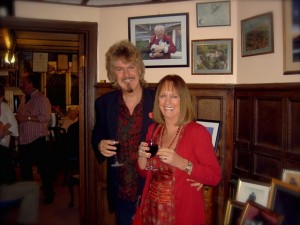 In 1996 I took the guitarist Brian May down to Selsey for the first time. He had met Patrick briefly as an astronomy student  in the days before Queen took off, but this time they began a long and beneficial collaboration. 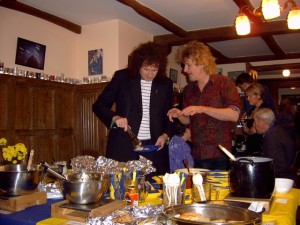 It was Patrick who encouraged Brian to complete his PhD and Brian’s doctorate party was at Farthings in 2007. The invitation said “Dress: Scientific”, and with a typical disregard for convention, Patrick had himself dressed up as Professor Dumbledore from the Harry Potter books. 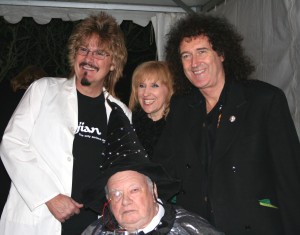 In the same year, I was honoured to be asked by Patrick and his producer Jane Fletcher to serve as script editor on the 50th Anniversary edition of The Sky At Night. Patrick sensibly confined me to editing the non-scientific portions of the script … 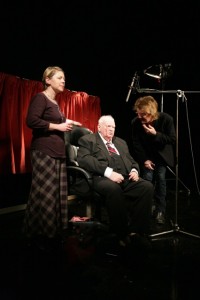 When Patrick died in December 2012 it was a huge loss to the world of popular science. He had inspired millions of people to look up at the sky and take an interest in astronomy. Many of them became professional astronomers and physicists. 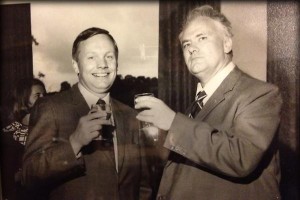 Patrick lived a remarkable life. He shook hands with Orville Wright, – the first man to pilot a powered aircraft –  and was friends with the first man on the moon, Neil Armstrong. In fact NASA used Patrick’s intricate moon maps to decide where the Apollo landings should take place.

Privately, Patrick was a convivial, charming host with a mischievous sense of humour (which could get him into trouble). He adored  cats, and his beloved black cat Ptolemy was with him at the end. 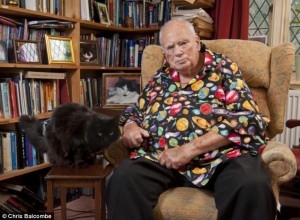 Patrick’s funeral in January 2013 was attended by his closest friends. It was a mixture of sadness and of celebration. Of course there was plenty of laughter – Patrick was serious about his science but never about himself.  Brian and I had one last photo taken in Patrick’s office, where we had spent so much time with him. 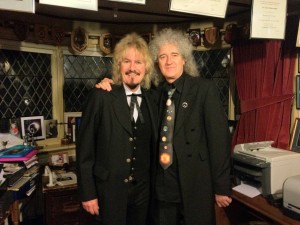 When I was asked by my Perfectly Normal Productions colleague Dave Morley to direct Far Side Of The Moore, a BBC Radio 4 Afternoon Drama about The Sky At Night‘s creaton in 1957, I knew it would take a very special script to capture Patrick’s unique personality and warmth. Sean Grundy turned out a wonderful piece which did exactly that. It received much acclaim. 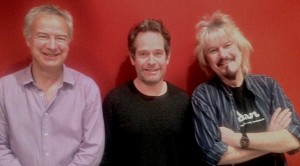 Tom Hollander was superb as Patrick – uncannily capturing his voice and mannerisms – both on screen and off. With my eyes shut I could have sworn he was with us in the room.

I am as proud of our production as I was to know Patrick.